It scares me. No, not foreigners, other religions or headscarves in the street, but the Dutch politics that wins voters by disqualifying world citizens. What frightens me is that neoliberalism in the Netherlands, but in many other European countries too, propagates the idea of the nation state – one’s own citizens first, the border closed to the unknown – while our civilisation became a global one a long time ago. Back to the nation state to save the domestic market or democracy is an outdated principle. At the start of the twenty-first century, borders – the basis on which the nation and international politics are based – are undergoing strong political transformations that our civilisation owes to its own success, namely its global stake. In the past it was only capital that was free to establish itself, but now, at least in theory, as citizens we are free to move anywhere in the world. Instead of closing the borders, our civilisation ought to be opening up new roads to give our global cosmopolitan culture – nobody complains about the culinary diversity of the Netherlands – every opportunity. We should be curious about, not frightened by the unfamiliar. With the growth of globalisation we should turn our backs on provincialism once and for all. What the élite could only dream of in the nineteenth century – a cosmopolitan culture – has become reality through globalisation as a splendid accident. We are all cosmopolitan now, but what a civilisation can mean, what the idea of the city of the future can be beyond banal cosmopolitanism, is a question that politicians, architects and critics in the Netherlands have failed to ask themselves until very recently.

Towards a Cosmopolitan Praxis
On the practices of: Powerhouse Company, Dogma, Crimson, Gruppo A12, Servino, Kempe Thill, Onix, ...

On the occasion of the reopening of the Dutch Embassy in May 2007, the Dutch Embassy in Rome wants to celebrate this with several cultural events, which will have links with the building, the state of the architecture and the art works which will be permanently on display in and on top of the Embassy. In order to address the specificity of the occasion, as far as architecture is concerned, has been imagined an exhibition about the activity of some Dutch offices of the youngest generation. They will be compared with an equal panel of Italian, emergent groups, whose work, for different reasons, is related to the Dutch scene, also to indicate the ultimate European condition in which more and more the youngest designers grow up and use to operate today. The field in which the "match" takes place is borrowed from the actual condition of Dutch architecture. In the last decade Dutch architecture has been one of the most successful and influential, recognized on a planetary level and extremely appreciated. Pragmatism a masterly mixture of freshness, efficiency and "realism" was the most important character that contributed to its affirmation. [More...] 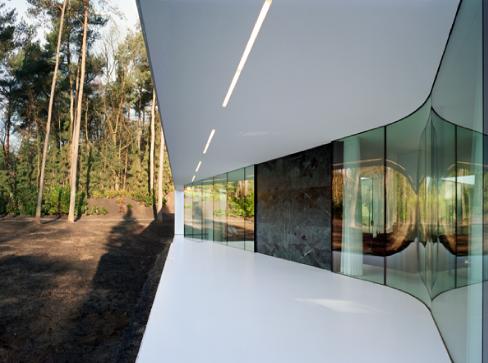