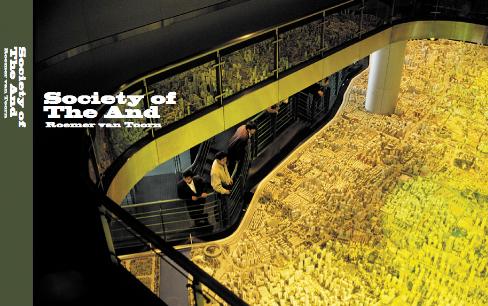 With the traveloque of images in the photobook the Society of the And the viewer is challenged to carry out a montage. A dialogue full of ambiguities, contradictions and positions should set itself into presence. While the viewer is invited to look to the facts, I hope s/he start to see beyond the stereotypical, beyond the world of stupifying banality, routine and mechanical reproduction. The format of the images is chosen not only that you decode, that you decipher what you "read" (as in the television news), no, you are also invited to see the free play, the unfinished pieces, the juxtapositions, gaps and openings within the Society of the And. The challenge is to extract a genuine image from the Society of the And, free the visual from any prior program, or fixed gaze (theatricality), to release ourselves from the suffocation of the cliché.

A new spectre is haunting the world – the spectre of And. It is the spectre of urbanity, the one of the multitude that haunts society. All the cultural, technological, economical and intellectual powers in the world – both on the left and the right – have embraced this spectre. Formerly the dominant forces were separation and specialisation, the struggle for clarity and the reduction of the world to calculable proportions; now we talk about One World based on simultaneity, mobility, migration, fluidity, multiplicity, reflexivity, individualism, risk, urban warfare, uncertainty, chaos theory, hybridization, diaspora, the state of exception, schizophrenia, privitization, heterotopia, immersion, the space of flows, the culture of sprawl, cyborgs and so on. The Either-Or world in which we lived and acted became increasingly an illusion. Our modernity no longer develops mainly in instrumental, rational and linear terms; instead it takes its direction from the rules of side-effects. In a certain sense Modernity might be considered more ideological while the Society of the And (2nd Modernity) is more pragmatic

Currently Van Toorn is finalising his contribiting article on the Society of the And (with photos from Isreal/Palestina, Dubai, Egypt, India and New York) for the upcoming double book series published by the Strong Research Environment Architecture in Effect (Stockholm) in collaboration with Actar Publishers (september 2017). Both the research publications Rethinking the Social and After Effect, with contributions by different research authors, have been made possible with the support of the Swedish Research Council Formas, Architecture in Effect.

The photo book the "Society of The And. The bewildering interdepence of our times”, includes articles by Stefano Boeri, Bart Lootsma and more than160 pictures by Roemer van Toorn.

In the Society of the And life can be characterised by a complexity that tends to become ever more chaotic. In one way or another conflicts and liberating experiments emerge that cut a path beyond all Either-Or polarities. The near and the far intertweave; the local and global blend and impact each other. Everything is infused with, and dependent on everything else; what counts isn’t two or three or however many, it is the conjunction And. The global, diffuse and formless character of the And rocks not only all relations, it rocks all kinds of earlier identities based on the verb “to be”. The And is not simply a collection of elements but a sytem of complex relations in space ochestrated by different time rhythems. The relationships between the various elements may consist of discourses, institutions, architectural forms, regulatory decisions, laws, administrative measures, scientific statements, cultural differences, philosophical, moral and economic propositions, and so on. With time of communication imploding and shrinking to the no-size of the instant, space and spatial markers cease to matter, at least for those whose actions can move with the speed of the electronic message. We live apparently in a fragmented world of collages of images, signs, imaginations, functions, and activities with myriad ways of connections and intensities that coexist with each other. While we complain about the loss of dominant form and the abundance of junkspace, we enjoy the advantages of being more and more mobile. Efficient and comfortable spaces of interconnection interweave paradoxically with the worlds of exclusions and disconnection within the same fabric. If there is coherence and integration within the Society of the And, it comes from the circulation of power within the technological infrastructure, of interlocking, interdependent agencies, practices and knowledge on a global scale. One thing is for sure the binaries oppositions that defined Modern conflict have been blurred. The dialectic logic, which helped Modernism to navigate in the world; of objectivity versus subjectivity, of the near versus the far, of fact versus value, of the city versus the countryside ensured that we could not understand reality as being both real And virtual, human And non-human, utopian And dystopian, local And global, heterogenious And homogenious. The new paradigm of power in the Society of the And rules through differential hierarchies of the hybrid and fragmentary subjectivies. The heterogeneous nature of the And, and its effects are not necessarily predictable, that means that a wide range of both positive and negative outcomes can be generated through development without attributing these to a metanarrative, or requiring that we solely see imposition at play. At the same time, though, such ensembles operate to achieve overall effects thereby serving a dominant strategic function within our corporate global world. The paradigm of difference, fluidity and hybridity within The Society of the And – so much celebrated by contemporary advocates of emancipation –, is today very much part of the colonization strategies of corporate globalism too. Although the urban, capitalist, and modern everyday is pushing towards increased homogeneity in daily life, the irreconcilable disjunctions born in the And full of anachronistic interstices still make it impossible to think of modernization as only negative. Nothing is never fully coherent in the Society of the And: its cultures are always already partial and full of hybrid formations. Michel de Certeau’s work confirmed the impossibility of a full colonization of everyday life by late capitalism and stressed that potential alternatives are always available, since individuals and institutions arrange resources and choose methods through particular creative arrangements. Instead of searching for a position outside the Society of the And it is better to enter the terrain of the And and confront its homegenizing and heterogenizing flows in all its global complexity.

Society of The And
The bewildering interdependence of our times, photography and text by Roemer van Toorn