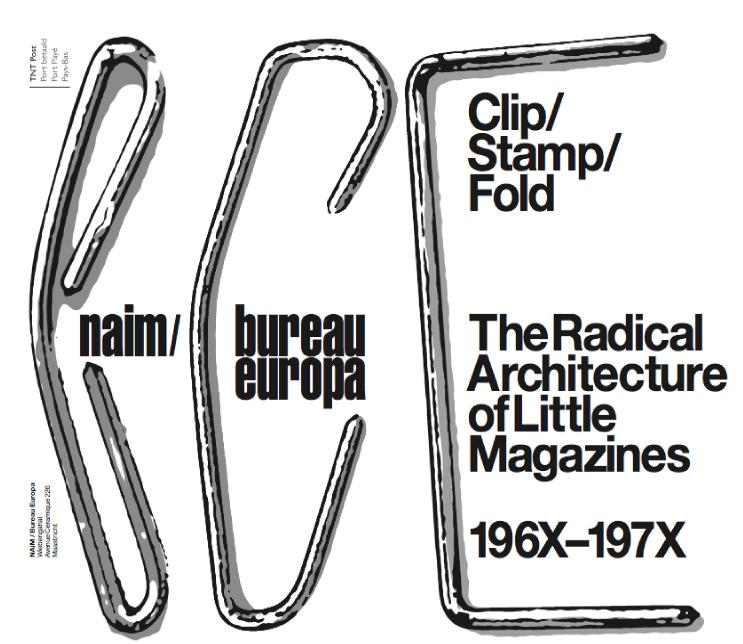 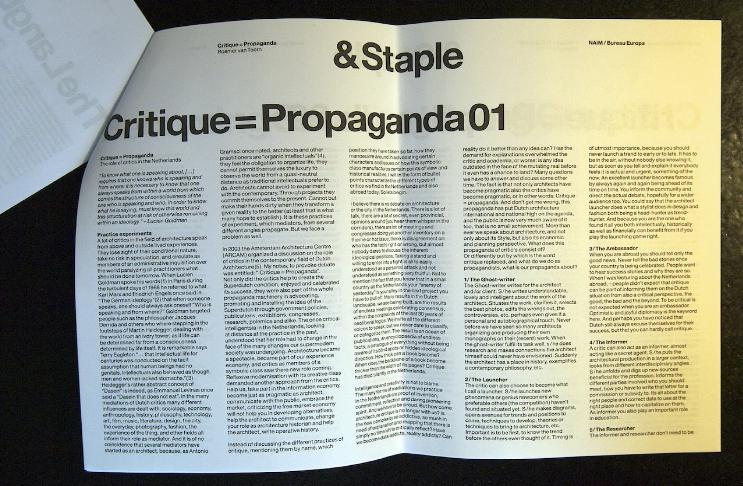 In 2010 the Nai Maastricht, together with Princeton Universit, organized an exhibition called Clip Stamp Fold in which Radical Architecture and the positions of little magazines are exhibited and discussed. For this exhibition they published a special magazine &Staple in which the text Critique = propaganda was re-published and translated in Dutch. For more information on Little Magazines see also:

The article appeared for the first time in the magazine Hunch after a symposium on Criticism Today at theatre De Balie, Amsterdam. An event organized by Arcam, Centre for Architecture Amsterdam, where most Dutch Architecture critics where present.

Critique = Propaganda
A lot of critics in the field of architecture speak from above and outside lived experiences. They lose sight of their conditional nature, take no risk in speculation, and circulate as members of an administrative inquisition over the world paralyzing all practitioners what should be done tomorrow. When Lucien Goldman spoke his words in Paris during the turbulent days of 1968 he referred to what Karl Marx and Friedrich Engels once said in “The German ideology” that when someone speaks, one should always ask oneself “Who is speaking and from where?” Goldman targeted people such as the philosopher Jacques Derrida and others who where stepping in the footsteps of Martin Heidegger, dealing with the world from an ivory-tower; as if life can be determined far from a consciousness determined by life itself. It is remarkable says Terry Eagleton “…that intellectual life for centuries was conducted on the tacit assumption that human beings had no genitals. Intellectuals also behaved as though men and women lacked stomachs.” Heidegger’s rather abstract concept of “Dasein” is indeed – as Emmanuel Levinas once said a “Dasein that does not eat”. In the many mediations of Dutch critics many different influences are delt with: sociology, economy, anthropology, history, philosophy, technology, art, film, music, literature, design, the city, the everyday, photography, fashion, the experience of the thing, and other fields all inform their role as mediator. And it is of no coincidence that several mediators have started as an architect, because – as Antonio Gramsci once noted – architects and other practitioners are “organic intellectuals”, they feel the obligation to organize life, they cannot permit themselves the luxury to observe the world from a quasi-neutral distance as traditional intellectuals prefer to do. Architects cannot avoid to experiment with the contemporary. Through projects they commit themselves to the present. Cannot but make their hands dirty when they transform a given reality to the better (at least that is what many hope to establish). It is these practices of experiment which mediators – from several different angles propagate. But we face a problem as well.
[More ... See PDF]

Critique = Propaganda
The Role of Critics in the Netherlands