In the civil practice of social democracy, particularly in the Netherlands, the blessed and prosperous mediocre stands in the centre. One preaches a humanism that cannot and will not reach further than the request to tame and educate: “… man is presented to the humanist, who applies to him his taming, training and forming measures – convinced as he is of the necessary cohesion between reading, sitting and calming down”, notices Peter Sloterdijk in his article “Regels voor het Mensenpark” (Rules for the Human Zoo) (1999). People started a domesticating system that makes them domestic animals. They create around them a park that shows an absolute beauty, consensus and order. Each risk, each form of noise, each rawness, each ugliness, incompleteness, difference, brokenness, alienation and schizophrenia, is disqualified in the discourse. Thus this civil practice is opposed to the idea of radical democracy, where the antagonisms of the beautiful and the ugly, the wild and the domesticated, convention and liberation, one and the other, Design and non-Design, good and bad, non-place and place, non-plan and plan, in brief the Dirtiness, are labelled as potential. Like Chantal Mouffe I am looking for a politics beyond the triumph of moralizing liberalism which pretends that antagonisms have been eradicated and that society can now be ruled through rational moral procedures and that the remaining conflicts can be resolved through juridical tribunes. I am not after making political architecture, but trying to make architecture politically again. I am looking for spaces full of “agonistic pluralism” , where conflict is not eradicated, neither taking the form of a struggle between enemies, but helps us to project progressive multitudes on the bases of the complexity of our reality. [More ... see PDF]

Pedro Gahando published the article for the first time in book Post.Rotterdam, 2001, in which the twin cultural capital cities of Porto and Rotterdam are "celebrated", it was an attempt to tackle with the lasting fascination generated by the turn of the century Dutch architectural production vis-a-vis the laboratorial nature of Rotterdam’s post-war urban history. Crimson, Architectural Historians, curated the historical section of the exhibition.

HYPE(R)SCAPES
After supermodernism, after the SuperDutch generation and after the hype that surrounded Dutch architecture in the nineties, Hyperscapes reflects the proliferation of images, diagrams and concepts that came to stay, transformed in architectural hypertext. After the artificial landscape, after the datascape and before the already suggested totalscapes, here is the imagescape, the intermediate and intermediary scape where the link over the image can either take you to a complex web of information, to a diagram of a bureaucratic regulation or to a photoshop texture.

After the tabula rasa and after the build-up of the surgical excerpts of the modern city, the laboratory of the formless city brought about a combination where architectonic subtexts of various origins connect to the most diverse extrusions of statistics and rules that define everyday life.

It has become a habit in the past few years, every time one talks of architecture and urbanism in the Netherlands, to start off by pointing out the figures, the statistics and the data that characterize this relatively small-sized nation. People are taken by surprise when they realize that, behind the Netherlands’ discrete profile, hides an economic power that matches other countries with a far greater exposure within the European context.

After all, it is the feeling that everything is possible, inherent to all engineering feats, that allowed the Netherlands to conquer a third of its territory to the North Sea. And this feeling is certainly perceptible in the research of the physical and conceptual limits inherent to certain practices in Dutch contemporary architecture.

Issues such as the artificial nature of a large portion of the territory; such as the horizontality and geometricality of the landscape; as well as a level of density that can only compare to Japan, all seem to surface when the actual architectonic objects are being created.

The paradigmatic example is the Dutch pavilion at the Hanover world exhibition 2000, which was symptomatically accompanied by the publication of the abovementioned Remaking NL. Designed by MVRDV, the pavilion is firstly a metaphor, if not even a literal demonstration of a strategy aimed at dealing with the territorial reorganisation of the Netherlands. 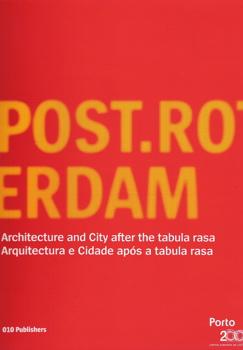